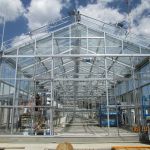 CMF was selected by the international maize and wheat improvement centre (CIMMYT) to achieve the first biotechnology research greenhouses in Latin America.

Integrated within a large laboratories complex, situated 45 km from Mexico City, the humanitarian site was officially inaugurated on February 13th in the presence of Bill Gates, Carlos Slim, and a Mexican delegation.