PARTNER OF THE PROJECT « LA CANTINE DU VOYRAGE » in Nantes 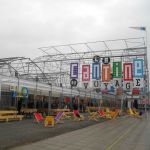 CMF has been selected to carry out the project « La Cantine du Voyage » in Nantes, located on the Western tip of the Isle of Nantes, close to the « Hangar à Bananes ».

« La Cantine du Voyage » is a unique and ephemeral concept, which takes place within a comprehensive approach of sustainable development, by its vocation, and by its design as well. Both food place and bar, « La Cantine du Voyage » can also be considered as a cultural centre, living showcase of the agricultural offer quality of the region and the sustainable relationship it maintains with the population.